My trip to Kauai, Hawaii

Since so many of you were interested in my trip to Hawaii, I thought I should share my experience with you on my blog as well. On November 10, I took a plane from LAX (Los Angeles) to LIH (Lihue) and the six-hour-flight was not too bad. I booked it approximately one week earlier and also rented a car, however, my accommodation only one day before I left. Everything was pretty spontaneous… I wasn’t feeling very well and one of my closest friends Juju just told me she probably won’t come visit me in LA so I knew I had to get out and do something! HAWAII has been on my bucket list for a decade already, is part of the states and is not too far away from LA so the decision was pretty obvious. I’ve heard so many great things of the Hawaiian island KAUAI before and seen pictures from friends and other people on instagram.

Now, I can’t even imagine I didn’t wanna go first because I was still not feeling well but as soon as I was at the airport, I was ready to go. When I arrived in Lihue, I was super excited already and couldn’t wait to see my rental car: a Jeep Wrangler! In my opinion, you should spend your money right – especially if you’re traveling alone. I was freaking out when I got to see my car for the next days and before even checking into my airbnb room, I drove to the beach instead. I always ask locals for their recommendations (they usually know even better than a travel guide) and the guy at the car rental said Poipu beach which I was interested in is nice. One of the great facts about this island is that you don’t need much time to get from A to B, and the traffic runs smoothly.

At Poipu, I took a quick dip into the clear water and lied down for a bit. Then, I wanted to find a rental for snorkeling gear and instead, ran into two friendly local guys at the parking lot. They asked me if I want to join for food and I was like „Sure, why not?!“ I was hungry anyway! It was delicious, I made new buddies, and they even showed me a beautiful spot close by called Allerkins I believe. You might have seen one of my youtube videos or instagram posts. 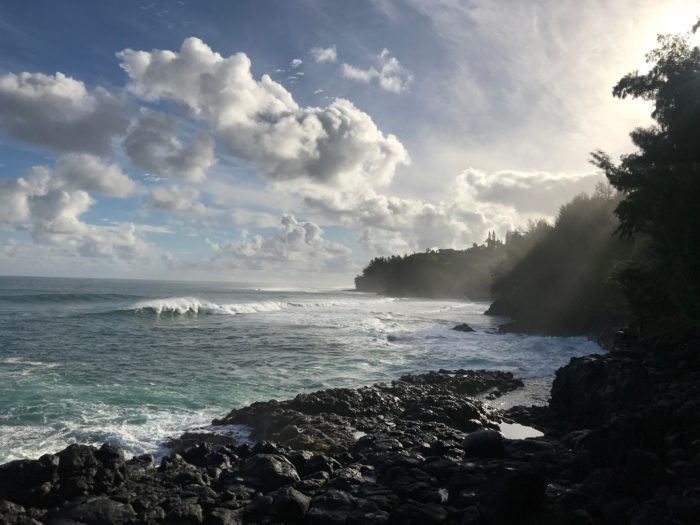 On the second day, I planned on finding Turtle Cave (or Cove) but found Queen’s Bath and some really big waves instead! It was kind of scary but still incredible and worth to watch. Then, I kept driving to Hanalei and went on the Okolehao Trail. It was really hot and I was sweating like crazy but made it to the top in like an hour. The view is beyond beautiful but only because I was lucky with the weather. Don’t go up there if it’s raining, you won’t see anything except fog! After that, even though I was pretty tired already I decided to do another one: Wai Koa Loop Trail which took me to the Stone Dam; it was long and rainy but worth it. Later on, I found out you can drive even closer to the sight itself – if I would have just known that! I’m sure it took me like 2-3 hours in total. 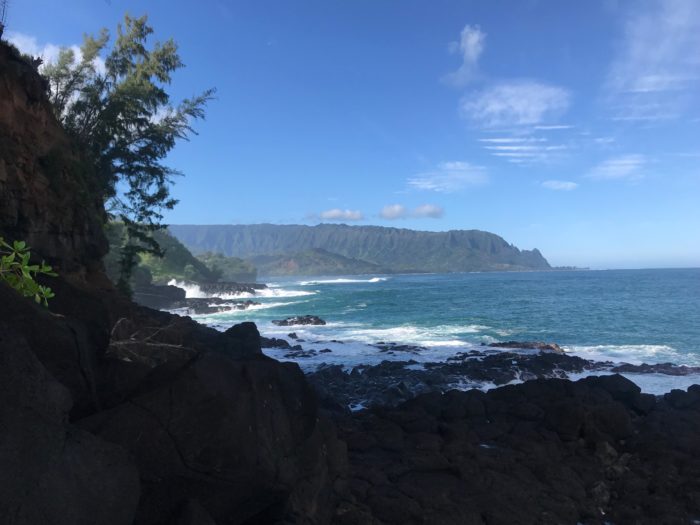 The third day was the best day during my whole visit for sure! Thanks to Safari Helicopters, it started with my first heli flight ever which was breathtaking!! To be honest, I was a little bit nervous in the beginning but helicopter flights are way smoother than I expected. Kauai is probably even more beautiful from above and the pilot also told us about the history of the Garden Island. Did you know it is the wettest place on earth?! Also, most part of the island is not even accessible and a huge part belongs to the Robertson family which promised the king, who sold them the land, to keep it that way. Moreover, Kauai is also a popular movie setting like for Jurassic Park or Indiana Jones for instance. 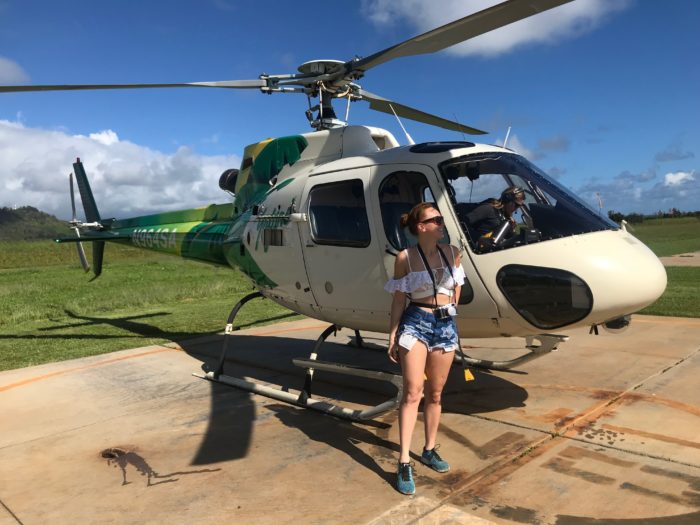 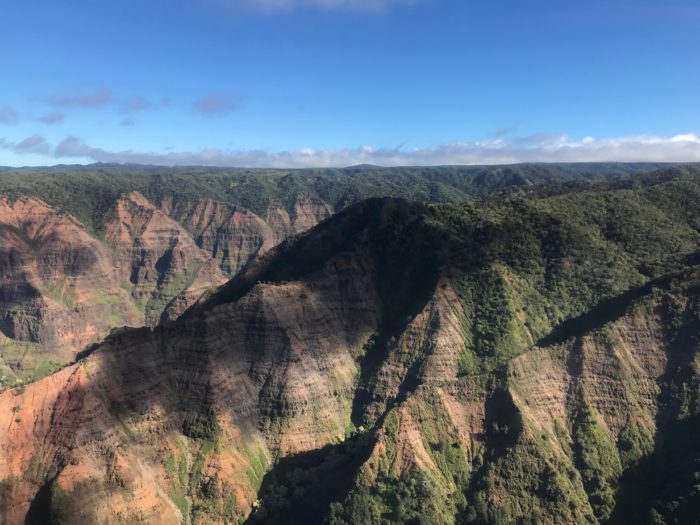 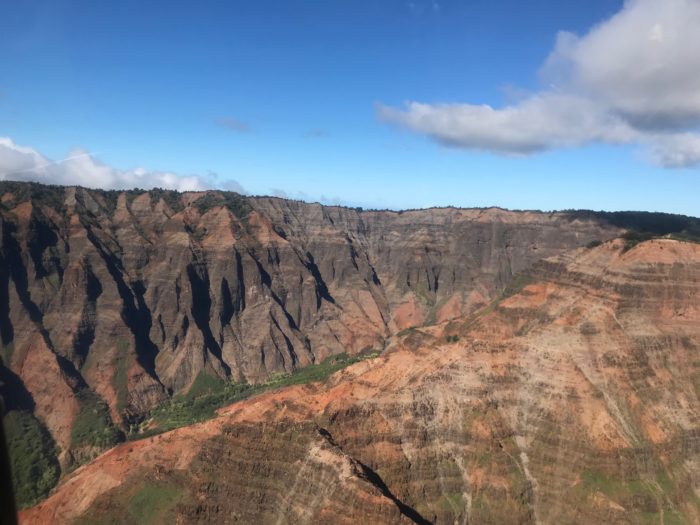 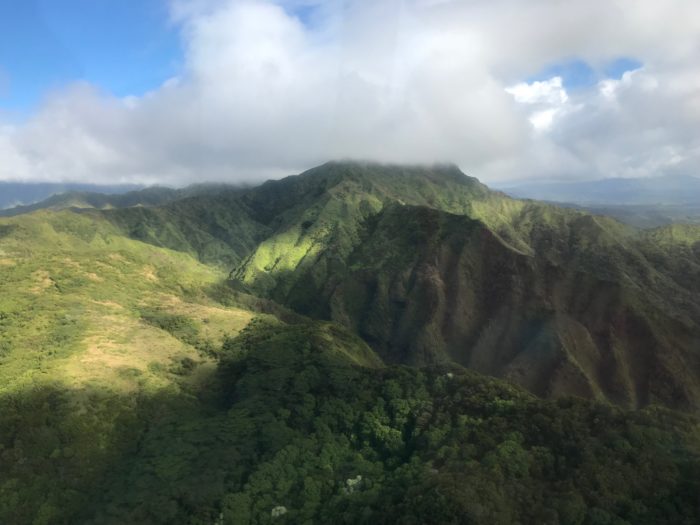 After one of the greatest experiences ever in my life so far (no shit!), I still had lots of time to fill the day. I decided to drive up the mountains to the Waimea Canyon State Park and some other lookouts in that area (Kalalau Trail f.e.). They call it the Grand Canyon of the Pacific and it truly is; reminded me so much of it and I have just been there in spring this year. After taking lots of nice pictures and enjoying the beautiful scenery, I still had time and drove all the way to Polihale State Park, probably the longest and also loneliest beach on Kauai. 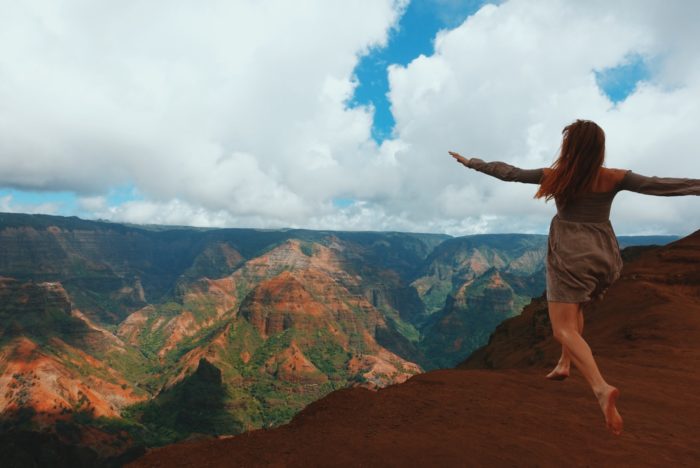 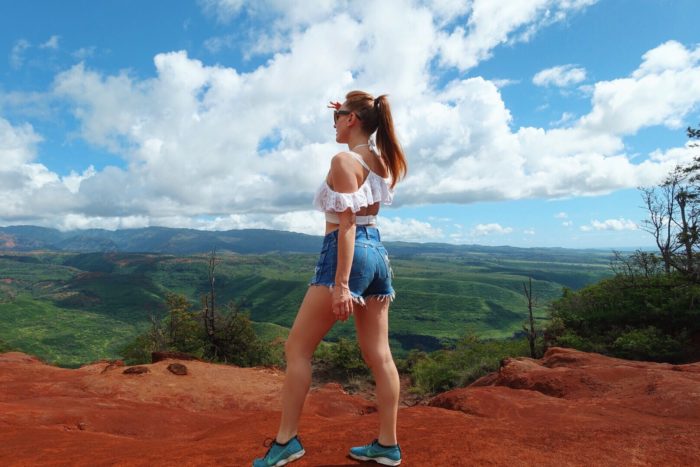 On my last day, I spontaneously decided to go on a catamaran trip to the Na Pali Coast with Captain Andy’s Tours. I already thought I won’t see any dolphins on my trip anymore but not only have I spotted two different kinds of them – the Bottlenose & Spinner Dolphins – I finally found the sea turtles after all and even got to touch one while snorkeling in the ocean. I also touched all different kinds of colorful fish and one even thought I’m his lunch and bit me. Haha but at least it wasn’t a shark! It was great to see the Napali Coast from another point of view and I loved the trip. When we got back, I took a little nap at the Salt Pond Beach and after that, used my last energy to climb down the Waimea Falls. No kidding, that was my personal Lara Croft moment! 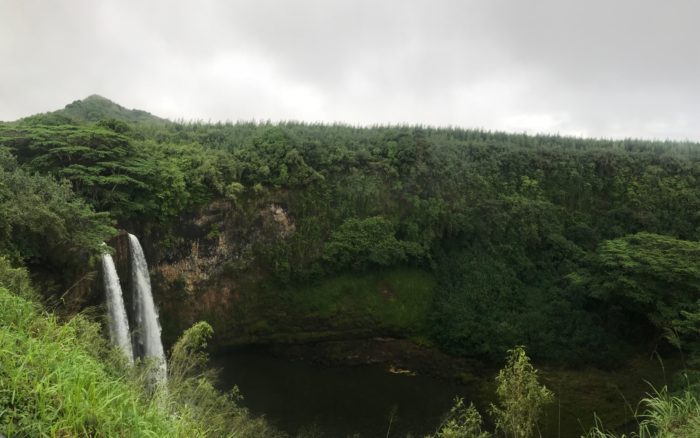 In the morning, before I went to the airport, I wanted to do something else and decided to go on a kayak ride on the Waimea River since a follower recommended it to me. It was such a great workout and most of the time, I was completely alone – just me and the wild. It was actually getting kind of spooky in between… 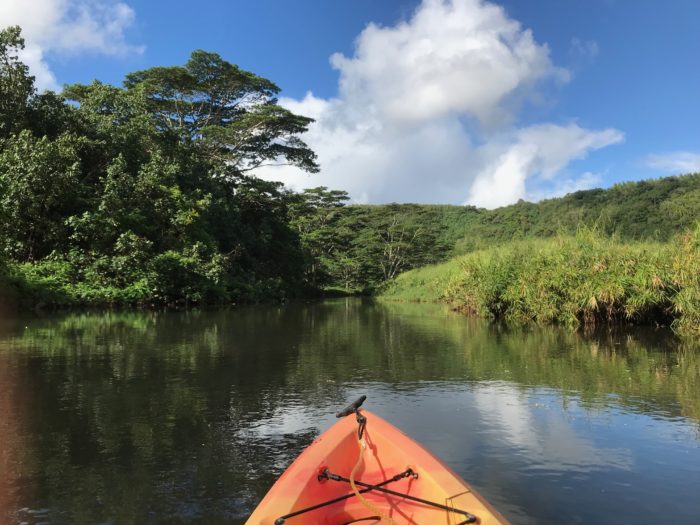 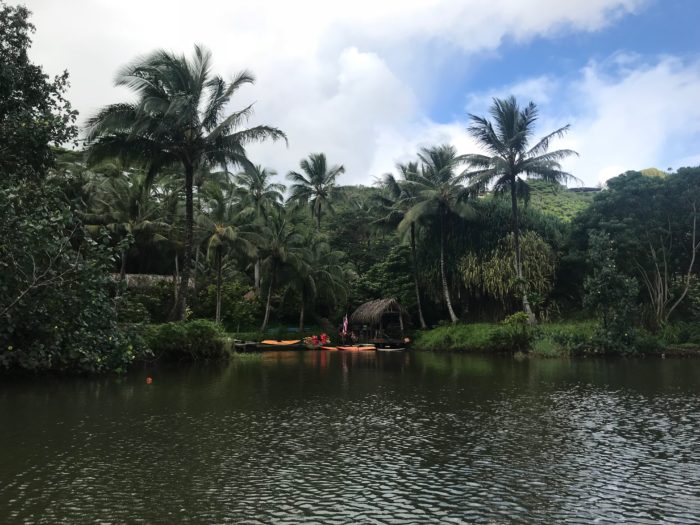 Most questions I’ve received since the trip deal with me traveling alone and how I dare to do such things on my own. Well, my answer is actually pretty simple. It makes me happy to push myself. I think it is essential to be able to grow as a personality and you can’t help but becoming a more confident human being. I just love that feeling! Also, I love nature and trust it more than most people even.

Believe me, I have seen a couple of places so far, and Kauai definitely belongs to my top five. You need to see this green island – whether alone or with someone! I don’t necessarily want to go back to places I visited but this one… oh yes!

In case I didn’t answer all of your questions in my article already, feel free to leave a comment underneath. :)